LIFE IN ITALY - GIFT OR NIGHTMARE?

In 1997 I left Switzerland to spend a few months working at a theater in a coastal city in Northern Germany. Wilhelmshaven was ugly, bombed out as nearly every German city during the second world war. No surprise that hardly anybody came to visit. A pity. The marvelous East Frisian Islands nearby make for a stunning tourist attraction.

Two years later I moved to Tuscany and became Switzerland's most popular citizen. Everybody put an elbow in to get my address or at least a phone number. When I moved to a spacious house near Montalcino, from Easter to October every single mattress would be taken.

Being of sociable breed I loved it. I adored being the host to a full house with an interchange of close friends, distant relatives and interesting new acquaintances. All these people wanting to spend time at my place made me feel rather special.

...and because they've obviously never seen a cypress tree before!" 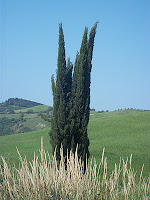 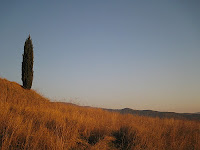 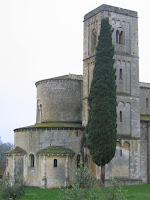 Touché. It wasn't about me. If anything it was about my local insight, but not about me in the sense that people would have come no matter where I lived. Did I already mention that German town?

Whatever. I didn't mind. Even if all our visitors wanted to see was a Tuscan tree and not me - one thing became very clear: finally I had gotten something fundamentally right in my life (it was about time). I was living in a house with a view, and I was making a living in one of the world's most sought-after places (at least I was trying to). The forgotten actress from that obscure theater play in Northern Germany had been transformed into the it girl. Not only that. I was smart too. I had managed to emigrate without having to give up on spending quality time with friends and family. People traveled after me!

But as in every fairy tale, doom is round the corner and one sunny day the whole damn world finally woke to discover Italy's dark forces. After all with Berlusconi entering the stage and Naples' garbage all over the place nobody could keep pretending that Italy was all about pizza and mandolino. Not that things had been all that different in the past. Anybody who ever cared to have a look at the country's recent and distant history (and some of its main characters) should have known about the dark shadows lurking in Italy's subconscious.

From one year to the next the questions when visiting Switzerland had changed. Nowadays they range from "You still live in Italy? Seriously?!" to "How bad is it?".

So had paradise on earth turned into a full-blown nightmare?

Honestly it's not like my day-to-day life had changed that much over the years. But with all those new questions being fired at me... was it time to rethink some of my major life choices? After all why in the world do I keep insisting on living in this country? This is exactly what my Tuscan native started to ask me too. The man who on our yearly holidays never tires of  complaining about Swiss weather and bad coffee suddenly played with the thought of packing up our bags: "Let's grab the kids and move up North." 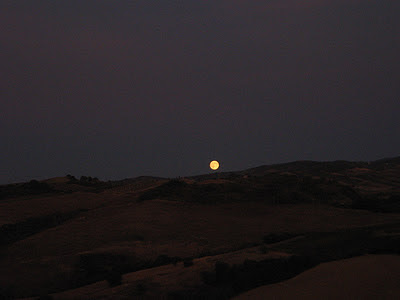 But for as long as I can open our front door and stumble into the moon - only over my dead body.

And thankfully no desperate fit of rage in post office queues and no utter disbelief whilst watching Italian TV will ever make me forget that Italy has managed to resolve one of my biggest issues in life.

It made me love Switzerland.

Weird? The thing is I never felt Swiss, never had any so called emotional attachment to my native country. Not until I've spent a few years living in Italy.

The Swiss virtues I couldn't appreciate as a teenager - punctuality, efficiency, transparency to name but a few - I dream of them now. Ask me about the Swiss political system and my chest will swell with pride. Try mentioning Switzerland's extensive cycling paths and its national railway - you'll have me talking for hours on end.

But the thing is, the magic only works in Italy. The moment I cross the Swiss border the spell is broken. It's similar to Renaissance art - the secret lies in the perspective. Put my portrait into the middle of a Swiss still life and here she is again, that disorganized and chaotic woman; arriving late as always with a red head and sweaty armpits from all that frantic running.

Put that very same portrait of mine in front of an Italian landscape, and - holy Moses - I'll rise like a phoenix out of the ashes in form of the woman known to my Tuscan village as the personification of the ideal Swiss citizen: calm, efficient, friendly and reliable. Obviously I'm still arriving late - my usual 10 minutes - but with no sweating and panting. Why run if everybody else hasn't even parked their car yet?

As I keep repeating to some of my patients: Certain personality disorders don't need therapy. Just change the country!

Therefore Italy will always remain my it place. And it's a relief to know that I'm not on my own. There is a group of gifted women out there who insist on shining the torch on all things Italian. The Italy Blogging Roundtable is taking up the challenge post by post. Just read the paper today and feeling a bit low in regard to Italy? Here's how you'll get your initial infatuation back: join that table and take some time to get inspired with Tuscany at ArtTrav and At Home in Tuscany, unravel Umbria with Brigolante or take in the whole of Italy thanks to Why Go Italy and Italofile.

Now all that's left for me to do, is to thank the fab Italy Roundtable quintet for opening their monthly blogging session to the rest of us. That's why I'd like to pass on a little gift too: just lean back and enjoy twenty minutes with writer Elisabeth Gilbert on Ted Talks. I haven't read any of her books so far, neither have I seen the big screen adaptions of them. All I know is that her Ted Talk rocks - full of insight and too hilarious for words. And yes, it has a hell of a lot  to do with the country we live in and with some of the choices we have taken by living here. In her talk Elisabeth Gilbert focuses on creativity (one out of many Italian virtues) and on the lack of it (ditto). And she definitely found the culprit. As always all roads lead to Rome - for fresco painters and bloggers alike.